This is the same route I took on Thursday afternoon.  This time I started the hike at 8:57am and had some human company.  Kel and Steve and their dogs Rudy and Trace, along with Zeke, went on this hike.  I kept the other dogs at home to keep this hike from being overrun by dogs.

We left from the Quail Ridge RV campground in Whetstone and drove east on SR82, which takes us a mile north of Middlemarch Road off SR80.  Steve rode with me; Kel rode in his Toyota.  It's about a 32-mile drive from Whetstone.  We were the first vehicles in the parking area. 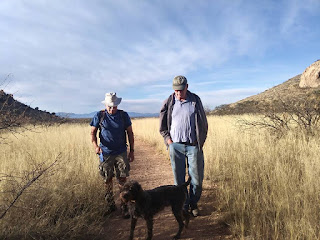 It was considerably cooler this time and that made the route easier to hike.  I never put on my windbreaker today. This time I made sure I was on that unmarked horse trail off Slavin Gulch, .85 mile from the start.  That faint trail is just past the (dry) creek to the left, camouflaged with tall grass and thus hard to see.  Staying on the trail from the start made the trail easier to follow, although the catclaw was as poky as it was on Thursday and Kel was wearing shorts.   My new Carthartt jeans took a beating, and my driweave Royal Robbins shirt (I love their hiking shirts!) got a few new snags in it. 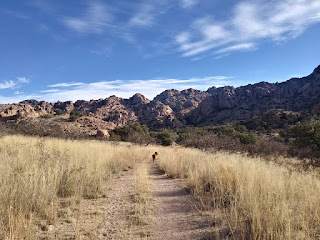 We stopped several times for water breaks.  Trace flushed a few quail a few times.  Rudy stayed on the leash the entire hike.  Zeke stayed by my side, and Kel even told me he was impressed with that.  The three dogs got along.  Minnie would have harassed Rudy and Sadie would have kept her distance from the others.  We all followed the trail/wash as it hugged the rocky mounds.  For a first-timer, walking around the hoodoos must be a thrilling experience.  Neither complained about the catclaw scratching their skin. 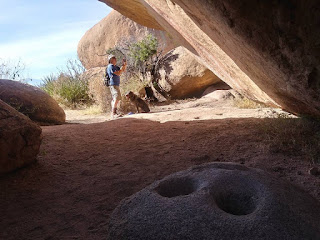 We spent some time at Council Rocks so that the guys could check out the pictographs.  We sat in the shade by the cubical rock where there still was some water in the depression.  Half of the water has evaporated since Thursday.  Trace and Rudy sat in the water while Zeke sat next to me.  He wasn't being very playful here and refused most of his duck jerky treats which Trace more than enthusiastically took instead.  Hopefully, Zeke was just tired, or perhaps warm from the sun and just needed a break. 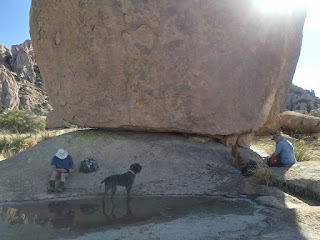 A large group of what looked like Apache women came to the rocks as we started on our return loop, going the same way I went on Thursday, along FR687, until hitting that horse trail again. This time there were cattle in the area. Kel found a nice rocky area to rest and take in the views from here.  The RVs I passed on Thursday were no longer there. 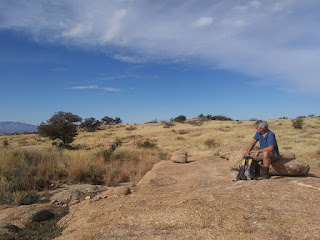 We got back to the trucks at 1pm, making this a four-hour hike. My app said it was 6.27 miles, shorter than Thursday's track, but I feel this is more of a 6.5-mile loop.  Even the write-up for the Huachuca Hiking Club, which will host this loop in two weeks, says it's 6.5 miles.   I need to find a reliable GPS app; MapMyHike doesn't work well for me as my track read we hiked 2.06 hours when in fact it was four hours.

There were three more vehicles in the parking area now. We still had plenty of time to eat lunch in Tombstone, but then Kel's truck got a flat in the front right tire which took the guys a bit to fix.  Some green slime and a pump-up with Kel's Viair compressor did the trick.  I was impressed with that little Viair!  My front right tire looked low on air as well and Steve got that one filled for me.  He said PSI was down to 15 (!!!) when it should have been 30.

Kevin was already asleep when I got home at 4:40pm, but the other dogs wanted their walk, too.  I took the pack back to my usual walking area by Rancho San Pedro, but then none of the dogs wanted to hop out to walk.  Huh?!  Turns out they didn't want to walk on the pavement, they wanted to walk on the dirt road a half-mile away, so I made that our destination today.  I started feeling tired and only walked .83 miles.  That seemed to satisfy my pack today.

Weather next Saturday looks to be partly cloudy with temperatures in the low 50s.  Sounds like a perfect time to head back to the Dragoons and do some exploring.  I've come across old trail reports to China Peak (7100', 7.8 miles) but there's nothing more recent than 2010.  It's an old mining trail that takes one to the mining camp and the rocky peak.  Another area I'd love to explore with the guys is El Pilar dam in the Santa Ritas.  The hiking club did that last November.
at January 15, 2018