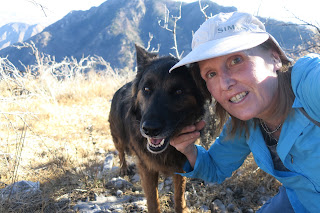 I waited until the absolute last day to hike up the peak this month.  It was a busy trail, too, with several young families making the hike, as well as a group in their 60s or 70s.    I only took Zeke and that worked out well, as there were other dogs on the trail today.

We started at 12:58pm.  That gave me little margin of error.  It was surprisingly mild, too, with temperatures at 82F at the start in the sun. There wasn't even much wind on the peak.  I wore an Under Armour base shirt and a long-sleeved blue blouse over that and that was enough to keep me warm.  Weatherwise, it was an ideal day to trek up the mountain. 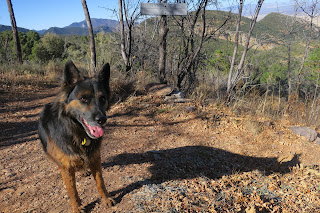 I didn't see much wildlife, though.  All but three wildflowers were still in their colors, but everything else is now dormant.  A smoke trail that was to the north yesterday was now to the east.  Otherwise, this month's hike was rather nondescript.  I stayed at the peak to practice my selfie-taking with Zeke.  Another couple shared the peak with me and of course Zeke tried to charm them, too. 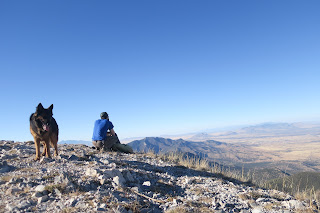 
I decided to walk the trail the BLM Ranger told me about two days ago.  I drove down to Palominas, parked the van at the old Trading Post diner off SR92 (it closed in 2009) and immediately saw the gate the ranger told me about behind the diner.  "Day Use Only,  Sunrise to Sunset" said the sign on the gate.  It was 4pm.  I had just under two hours.  I had no idea how far south I could safely go. We entered and started our walk going due south.  In a quarter mile I walked past the sign for the LDS campground pointing east toward the river.  There were no fresh tire tracks, but we did come across several piles of fresh scat.

The waning sun was in my eyes at the start.  I wore my hoodie but it was still warm at 80F.  The road I was on was a maintenance road traveling southwest to the Border Station.  Exposed, flat and at 4100', it wasn't much of a fun hike while the heat was on.  The dogs enjoyed the run as it got cooler.   We detoured briefly at the river but the river bed was dry here.  The dogs found a stagnant pool to romp in.  It was very quiet here along the river, although I was on the lookout for border crossers.

The farther south we went, the bushier the trail got.  Tail acacia shrubs lined the path, making it shadier for the dogs. I turned around at the 2.7 mile mark near a ranch house.  The international border is just 1.5 miles from where I turned around.  I would have walked longer but daylight was waning; sunset was at 5:18pm.  It was 5pm and the hawks were coming out for their nightly hunt.

I took the trail along the west bank of the river on the return.  This road is closer to the river than the official San Pedro River trail on the east side.  I should hike this all the way down to the border some day.  I could stop at the border station and let the agents know that I'm turning around at the border.  This way they won't chase after me when I engage a motion sensor.

The LDS campsite turned out to be the abandoned playground/picnic area just south of the bridge and the road was the same overgrown trail I first hiked with Sara over ten years ago.  There is far less migrant trash now along this road.  I only came across one sun-bleached horse blanket.  The dedication plaque from 2000 is still there.  When we first came to this campground in 2005, it already looked abandoned.  Now it's even more so, with tall weeds growing everywhere.

We made it back to the van at 6pm.  That gave me just 14 minutes of nautical twilight before darkness and a halfmoon took over.  Lights of homes hugging the Huachuca foothills were now coming on.  The dogs were happy to be back in the van and on the way home.  All four panted heavily and then attacked the water bucket for a good while.

Thanksgiving along the San Pedro River

Kevin and I had a quiet Thanksgiving.  I opted not to travel anywhere this year (to save up for the big trip over C'mas to Chicagoland) and perhaps put down money on a newer  SUV, and we decided to go out to eat instead.  He's still not 100% feeling good, which worries me, so we stayed alone this year. Kevin suggested trying the Country Kitchen.  I haven't been to this restaurant in 15 years.  Located on SR92 south of Sierra Vista, it always packs a house in the mornings on my way to the school.

We got there at 11am and there were plenty of tables open.  The rush hadn't started and that was fine with me.  It was mostly older people eating, couples who surely made the same decision.

The dinner was OK and nothing to rave about.  The turkey was processed, the mashed potatoes were bland, and pumpkin pie was another $1.99 added to the $15.95 per dinner.  We were both full though.  When we got back home, Kevin went to bed to rest and I decided to walk the dogs along the river.  It was noon, and the outside temperature was a pleasant 74F. 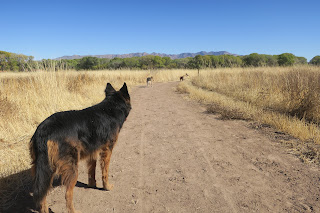 A young BLM ranger followed me into the parking lot at the Hereford Bridge lot.  At first I thought I had done something wrong.  I was driving 40mph so I know I wasn't speeding.  Was he coming after me to warn me about leashing up the dogs?  It was neither, although the ranger did say he is not going to enforce the leash law since no one else was around.   He just wanted to talk and meet with some of the visitors. We chatted a bit.  He gave me a tip of a trail behind the Morning Star restaurant in Palominas.  I had never heard of the trail there.  "That's all BLM land back there, you can go past the gate.  We just don't want vehicles driving through. Just be careful of hikers coming down from the San Pedro House," he said, "the parking lot was full!" 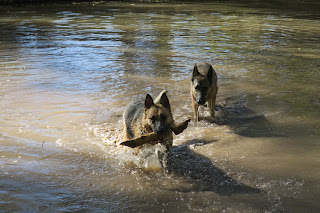 I had never seen hikers come that far south from the San Pedro House.  Not even I have hiked that path.  That's ten miles over rather boring, flat, exposed terrain.  The best part is walking through the river under the shade of the trees, and that is what I did.  The ranger also confirmed what I suspected:  due to lack of funding, the BLM went from 19 to five employees in this district.  The old station house was torn down several years ago and there's little money to maintain the trail.  That explains the overgrown weeds.

I managed almost four miles, hiking first along the official trail for a mile, then cutting off toward the river where the dogs could frolic in peace.  I always enjoy watching them chase each other in the water.  Even Minnie reverts back to her younger, stick-searching self and Sadie chases after her in a futile attempt to steal said stick.  Even Sweetie and Zeke run through the water with no care in the world. 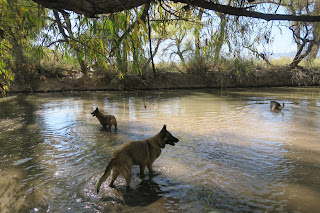 The weather was ideal.  Warm, with no breeze or clouds.  The leaves are still changing and we haven't had any cold, blustery winds yet to wipe out all the leaves off the trees.  I heard a few hawks and saw a few birds, but not much other wildlife.  What I did see were plenty of locusts along the river bed, some that bravely jumped suicidally into the river and getting swept away by the current.  There are still plenty of those pests, though.

The hike took me just under two hours.  I got back home at 2pm with still so much sunlight.  The dogs didn't bother me at 5pm when they usually get walked.  I could sit comfortably at home and stream a movie in peace. 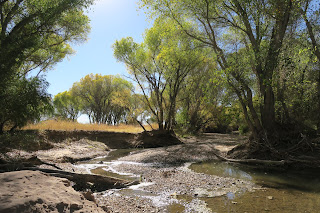 November's full moon came early this month.  Just like October's moon, it was shrouded in heavy cloud and thus not dramatic, but I did enjoy walking the dogs under the moonlight in the late evenings. 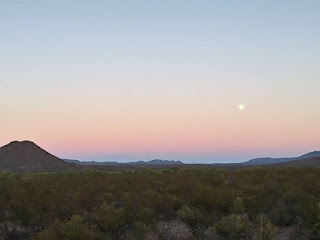 The official full moon was on the 3rd, a Friday.  Thursday I drove to Chip's house to give the cats some company, enjoying having several felines nudge up to me and purr.  The moon was rising over the dry Tombstone hills on my way home.  I got home early enough to give the dogs a two-mile loop walk which ended with us finishing in the dark with just the moon light outlining the path. 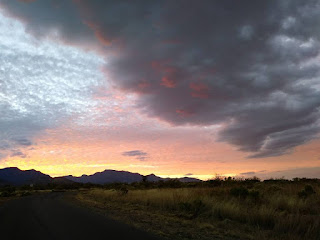 Friday I started the walk at 5:20pm under heavy clouds.  When the moon rose at 5:40pm it quickly hid behind a dark wall of clouds and stayed that way for an hour before lighting up the sky. 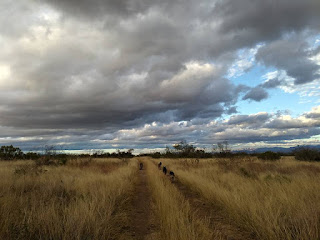 Saturday, yesterday, we had such dramatic storm clouds that walking was enjoyable.  The first cold morning of the season forced me into my sweatpants which I wore all day.  Kevin's been sick with the stomach flu that's been going around, so it was just me and the dogs all day, and all they looked forward to was this walk.  I took them out for their five-mile lollipop walk (named that because of the route: http://www.mapmyhike.com/workout/2560107364 ) and got to witness the colors change across the sky.  The moon yesterday was already down to 99.1%.   l love this kind of stormy weather, although the clouds never left the peaks and hiking up Carr would have been miserable in that windy, wet fog. 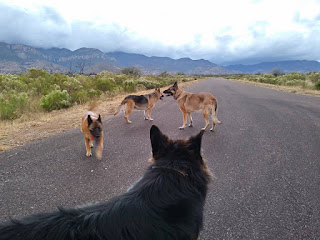 All four dogs seemed to enjoy the exercise.  Even Sadie is back in good spirits, but she's noticeably slowing down and by my side when the others want to chase after imaginary spirits in the grass.  I haven't seen any other dog walkers either, lately; just the solitary car driving by.  Even the coyotes have been quiet.  The sun sets now at 5:29pm and by 5:50pm it's past dusk.  I wouldn't be out in the dark like this without the dogs protecting me.

There was just enough sky for the sun to peak through at sunset, lighting up the Dragoon Mountains over Tombstone and adding a sprinkle of color across the western horizon.  While we may not have the dramatic leaf colors notorious in New England, we do get some beautiful sunsets this time of year. 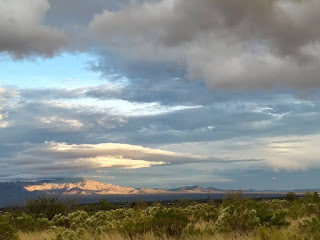