A day for the dogs

All this actually happened Friday, June 1st, three weeks ago.


I had made vet appointments for three dogs at the Cochise Animal Hospital in Bisbee; check-ups that were long overdue. I wanted to drive to Indiana knowing the dogs were healthy with no medical issues while I was away. I wanted Sara checked out for her labored breathing, and took Sammy and Minnie along as well. Sammy needed his shots and Minnie needed her first physical. Sadie came along for the ride as she insisted on bolting out with the others as we walked to the van. Since I normally stop at the San Pedro River on my way back home, I saw no reason not to take Sadie along for the ride, since the dogs enjoy the time in the river. But four dogs for one person is clearly too much.


There was an equestrian emergency as I pulled up to the clinic. A horse was bleeding badly from a front leg. Both doctors at the hospital were tending to the unfortunate creature, whose owner was told to take the horse immediately to Tucson as there is no one who specializes in horse medicine in this county. I waited inside for 45 minutes before Dr Snyder saw me. She is a new doctor at this clinic and she proved to be a very proficient doctor.


She suspects Sara is suffering from Cushing's Disease, a disease that strikes the pituatary gland. It's treatable but not curable and Sara can live a normal life. As Dr Snyder said, Sara's bowed back, her lethargy and her breathing all are symptoms of Cushing's Disease.


Sammy was deemed obese but with the heart of an "athlete." Minnie was also healthy but may have gotten kennel cough from the Maricopa shelter. As a precaution, all three dogs were given medication for kennel cough.


I agreed to a blood test for Sara. We waited another hour for that result. I was allowed to wait in the "comfort room," an isolated room with couch and separate treatment table that I assume is also used when ailing animals are put down and the owner wants one last moment alone with the pet. Sadie came inside to join us and we sat there, quietly. All four dogs (Zeke stayed at home) were laying on the cool tile floor with me.


Sara's tests came back normal but one area did appear elevated so as a precaution Dr Snyder put Sara on some antiinflamatory meds. I'll have a more detailed blood test on Sara when I am back from my summer roadtrip in July.


As promised, I stopped at the river. No one else was there so all four dogs ran out to the creekbed and splashed around. Sara, Sadie and Minnie went into the water. Just as I was about to lead them back to the van, an elderly couple came down from under the bridge.


The dogs began barking, the couple stopped and let the dogs sniff them, and then Sadie and Sara got into a fight behind me. I turned around and Sadie had Sara's front right leg in her arm, in a tight grip that prevented Sara from moving. Sara wasn't fighting back either because she couldn't move, or out of fear. Either way Sadie was determined to keep her hold on Sara no matter how hard I tried to hit Sadie with my backpack. What was going on here?!


"Sometimes dogs are like people, they just can't get along" said the man. Neither seemed bothered by the bloody ordeal in front of them, but I was concerned because Sadie was not letting go of Sara and I could see blood pouring from Sara's leg. When Sadie finally let go the leg look badly mauled. Sara was limping and I had to coax her to walk the 1/4 mile to the van, a distance that surely was painful for the old girl. I was in total shock by now, but focused on Sara. 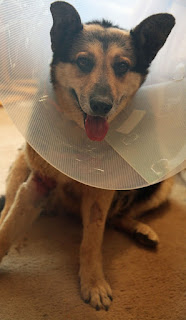 The blood had congealed enough by the time we got back to the van, and was dried by the time we got home. Sara never went into shock so I didn't deem it an emergency, but it wasn't until hours later, when Kevin was home, when I saw how badly cut she was. Sadie bit a three-inche wound at Sara's upper joint, and another two-inch wound behind her lower joint. We agreed she needed further medical attention and we made an appointment at the Sierra Animal Hospital. That place no longer is open until 9pm at night anymore, and we took a Saturday appointment instead.


I needed to go for a walk. Around 6:30pm I took Zeke, Sammy, Minnie and Sadie up Hunter Canyon for a run down the main road. I dropped the dogs off near the trailhead and drove slowly up the road. I watched the dogs in the rearview mirror. They were all running after the van, but Minnie saw something and darted south down a smaller trail. My mistake here was not stopping the van and going back after her. I thought she'd just catch up with the other dogs at our usual meeting place near the spring. But what was I thinking? Minnie had never walked around Hunter Canyon before and wasn't used to all the smells!


Zeke, Sammy and Sadie all caught up with me except Minnie. I called her name. No answer. I called again, still silence. I drove back toward the first trailhead parking area calling her name. Nothing. Another couple that had just driven up the road told me they saw a man with dark hair let Minnie into his beat-up old SUV and drive off. What? At least I knew she was not injured and would not be alone in the dark with coyotes or other dogs to deal with. She would have food and shelter. Dejected, I drove back home, taking all the blame for losing Minnie.


I placed a "Lost" ad on Craigslist and contacted my Facebook friends. I made up flyers to post up around town after Sara's vet visit.


The doctor on call could see that stitches were needed when Sara had her Saturday appointment. He agreed to treat Sara during his lunch break, as he was the only doctor on duty and had a full schedule. Sara spent most of the morning in a small kennel next to a rambunctious German Shepherd Dog, Oso. Kevin was kind enough to pay for this expense while I was driving around town putting up flyers and visitig both the Huachuca City and Sierra Vista animal shelters.


I didn't give up hope. My roadtrip to Indiana was postponed until Monday when I could place a newspaper ad, see the shelters again, and businesses were up and running again. I checked my email incessantly to see if anyone responded to my Craigslist ad. I got two false alarms.


On Sunday Valli drove me around the neighborhood to help me put up flyers around mailboxes, store bulleting boards and electrical poles. I saw stores I had never been inside before! We stayed west of Moson Road and south of Ramsey.


I got no responses anywhere for Minnie on Sunday. I had only Monday to hope for and went to bed early.


I was up early on Monday and checked my cell phone. I had gotten two messages the night before while my ellphone was charging: 10:03pm and 10:18pm from two unknown numbers. I tried calling either back but reception on my phone was limited and I kept getting dropped. Luckily whoseever number I was calling saw my attempt to call and returned my call.


It was the owner from Paddlediddle Bed and Breakfast ranch on SR92, Cody. His property is a half-mile south of Hunter Canyon. He had seen my Craiglist ad and knew he had Minnie because of the purple collar and lighting device she was carrying. Now in tears with relief, I drove straight to his ranch. Thirty minutes later Minnie was reunited with me. She seemed happy to see me again, and so was Zeke back at the house. He had been quiet all weekend, but now his beloved playmate was back.


I ended up leaving for Indiana Tuesday morning early, only because I spent Monday with the dogs in the backyard.
at June 21, 2012 No comments: