We started the new year with a full moon and ended the month with a second one, a blue blood moon.  This morning on my drive to the high school, I caught the end of the lunar eclipse as well. 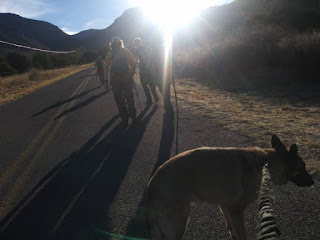 I scheduled a 4:30pm hike and 11 people showed up, including three teens.  Yesterday only one person showed up for a moonlight hike.  I took Minnie and Zeke.  Today I took Sadie and Zeke.  We had a strong group tonight with no lolligaggers, although I stayed in the back to chat with Susan and later KD, neither of whom I had seen in a while.  It was still warm at the start, mid 60s, and I wore my hoodie tied around the waste.  I left the water in the truck for later. 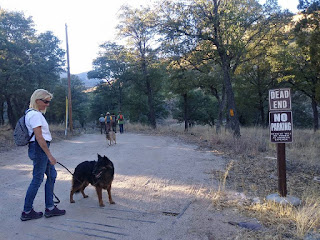 I had a few regulars tonight.  Robert, SusanM and KD were there.  Nina was late (as usual) and met us walking in the opposite direction.  She joined us above the ranch on a low hill facing the Mule Mountains. 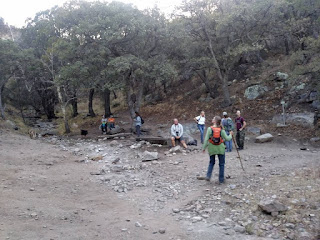 The moon rose as forecasted at 6:24pm.  The Belt of Venus, that brown shadow of the earth along the horizon, wasn't too bad today.  The moon's halo preceded the moon's rise.  Watching it made me miss my creative photography.  Tonight's moon was a photographer's delight.  No clouds obstructed the view. 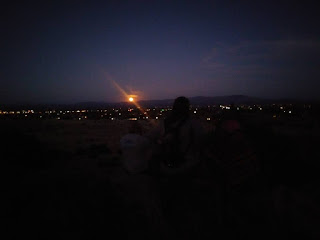 We all stood on the hill for a good ten minutes, chatting and gawking at the moon.  The sun set at 5:55pm so I didn't want to stall too long and risk walking down the steep hill in the dark.

We all were done before 7pm.  The teens and their parents quickly departed, Susan left to get back home to husband and GSD, while Robert, Nina, Janet and I had a post-hike meal at Native Wings.  We got here during their weekly Trivia game.  This is a popular and very loud game.  I'm sure it's fun for participants, but not so much fun for casual diners wanting a decent meal.  The game ended just before 8pm.  The place quickly emptied and we were able to converse again.
at January 31, 2018